Castelluccio di Norcia is a small village, that lies in the “Parco nazionale dei Monti Sibillini” in the Umbria region, and with its 1400 metres above the sea is one of the highest in the Appennini. The historical centre is placed on the top of a hill, in the middle of a tableland bearing the same name, very wide, where the famous lentils are coltivated.
It is the blooming of the latter, with other kind of flowers, that offer between the end of May and the beginning of June a truly unique sight. 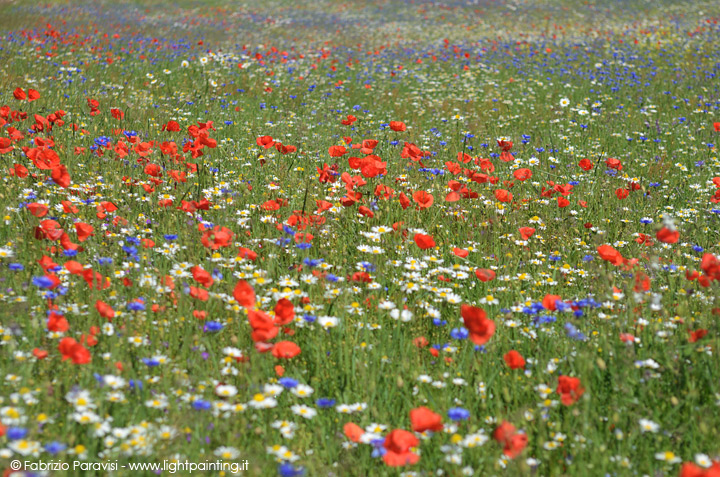 A mix of flowers on the plateau of Castelluccio

The blooming occurs mainly between May and July, but there is not a precise period because it all depends on the climate conditions. There is not even a peak, but it is a succession of blossomings of different species: daffodils, poppies, violets, gentianellas, lentils and many others. My advice is to check the blooming on websites listed below, as there are new photos pubblished every week.
If possible avoid Sundays, because the place is packed with tourists, almost unlivable I would say!

Sleeping at Norcia is probably the best and comfortable choice, as there are many farm holidays and restaurants, and Castelluccio is in reach in half an hour drive by car. If you really want to stay at Castelluccio there are some "agriturismi" (farm holiday) in the historical centre and a few mountain lodges along the road to Norcia. The latters are suitable for people who wants to hike or mountainbiking, along the numerous paths of the Monti Sibillini.

The purpose for 2013 was to photograph the three most photographed bloomings in Europe: the tulips in Holland, lentils in Castelluccio di Norcia and the lavender in Provence (France) listed in chronological order of flowering. The tulips approximately bloom in March/April, the lentils in May/June and the lavender in June/July.
Because of my commitments I gave up to the blooming of tulips, so my first stage has been Umbria.

The year 2013 has had a very long winter and for this reason all of the bloomings have retarded, I kept looking at photos on websites that I indicated previously and, in the first weekend available and with good weather conditions, I took the chance accompanied by my wife.
I persuaded her with the promise of a great dinner and I bragged myself of having found a good deal in a hotel with pool.. We departed saturday the 22nd of June very early in the morning to avoid queues on the A1 nearby Bologna, first stop of the trip has been Perugia, that we hadn’t visited previously. We left our car in a toll parking near the historical centre, that we visited on our feet.
At lunch time, despite the hot day, we couldn't resist a small stand that sold "porchetta" (grilled pork sandwich), a choice that turned out to be right! 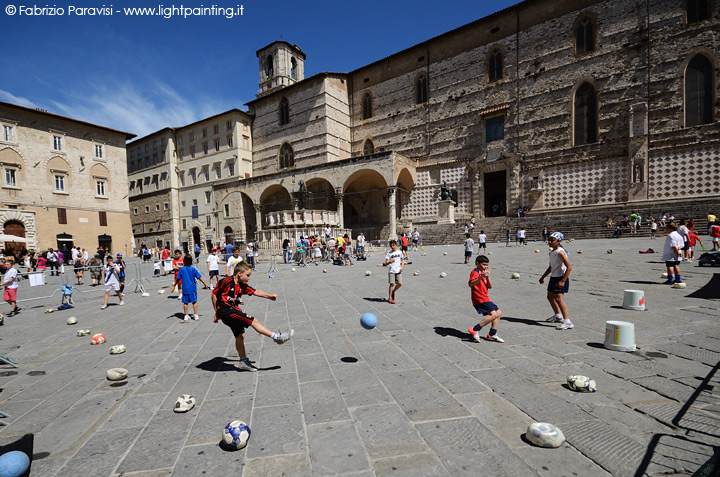 The square of Perugia

We regained the road in the early afternoon towards Preci, I could already see myself poolside with a cold beer at the hotel that I had booked...Hotel Agli Scacchi. After two hours trip we arrived at destination, the village of Preci is worth a visit, as the “Valle del Nera” along the SP209, road that also takes to Castelluccio through Castelsantangelo.
As soon as we arrived at the hotel we were dazzled by the pool, so we reached right away the reception for checking-in, the clerk has looked at the bookings and...”...your reservation is for tomorrow...”... I booked the wrong day!! And there were no rooms available...
I looked on the internet for a farm holiday nearby and after a few failed attempts I found a room at all'agriturismo Le Sorgenti at “località Casali Legogne” in Norcia, nothing to do with “frazione Legogna” still in Norcia... We found out this to our detriment, driving around the hills for an hour!
Finally later in the afternoon we arrived at the farm holiday, a quiet place on the hills at 3/4 km from the centre, we left our luggages, we took a shower and went back to Norcia for dinner. We had been suggested by the owner to eat at the agreed restaurant “Trattoria dei Priori”, placed in the middle of the historical centre, nice meal at reasonable prices. Apart of the food, I had the chance to taste the beer “Nursia”, brewed by the Benedectine monks beside the restaurant. I drunk the “Extra”, a doubble that reminded me of the Belgian trappiste beers.

Our breakfast at the farm holiday was really great, we ate 5 slices of homemade cake each, all of them really tasty, in particular the one with ricotta cheese, in fact we ate a whole cake! (I had been lucky, otherwise I would have been killed by my wife because of my booking mistake!)
Following the SP477 we arrived at Pian Grande di Castelluccio at 9:30, we stopped there to take pictures of bloomed meadows, before that they would have been invaded by the bedlam of tourists. Best thing is, without doubts, to visit these areas mid-week, in any case I knew that I could stop on Monday on the way back, since I had booked a room in the centre of Castelluccio ( with some fear due to what happened the day before...).

My fears have subsided only after we checked-in at Cascina Brandimarte, this time I haven't messed up the day! The place has been recently refurbished, very smartly, well-refined and equipped with all amenities, also the dinner was lovely, washed down with a nice bottle of Rosso di Montefalco (Antonelli).
Regarding the photographic equipment, I used the following focals: Wide-angle 10-20 mm, a normal 35-70 and macro 105; it is essential a tripod for framings, and at sunset when there is less light. The best time for shooting is with no doubts early in the morning and above all just before dusk.
In the early morning the plain “Pian Grande” is covered by fog whence emerges the village, creating a very suggestive atmosphere.

After a wonderful breakfast and some other pictures of the blooming we left towards Ancona, our aim was to have a swim in some beach of Conero, but the more we were getting close to the sea, more the sky turned dark. We arrived at the Adriatic sea in the middle of a rainstorm!
Since it was lunch time we stopped at the farm holiday "La Giuggiola" in Varano, where we have stayed some time earlier, and had eaten plentifully. Not even this time we were disappointed, besides, we had the chance to greet the owner, Raffaele, very nice and kind. If you are around there, the place is worth a visit, even just for hearty meal, I suggest potato dumpling with duck sauce (Gnocchi alla papera).
With our stuffed tummies, we left, heading towards home...see you next!

Have you got any suggestions or updates?

If you have updates about services, costs, or other useful informations SEND ME AN E-MAIL!